Culture Counts: Faith and Feeling in a World Besieged 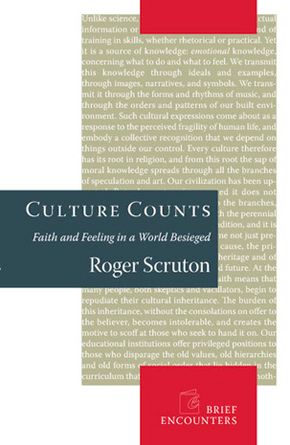 In this book, the renowned philosopher Roger Scruton defends Western culture against its internal critics and external enemies, and argues that rumors of its death are seriously exaggerated. He shows our culture to be a continuing source of moral knowledge, and rebuts the fashionable sarcasm that sees it as nothing more than the useless legacy of "dead white European males."

Ranging widely over the arts and philosophy, Scruton defends what Eliot called "the common pursuit of true judgment" against the dismissive attacks of the new academicians. In his striking account of music and its role in moral education, he defends the classical tradition as well as the American popular song, and points to the damage done to the psyche by the new forms of pop. He is robust in defense of traditional architecture and figurative painting; critical of the fashionable relativists and urgent in his plea for our civilization, which more than ever stands in need of the self-knowledge and self-confidence that are the gift of serious culture.