The Meaning of Conservatism 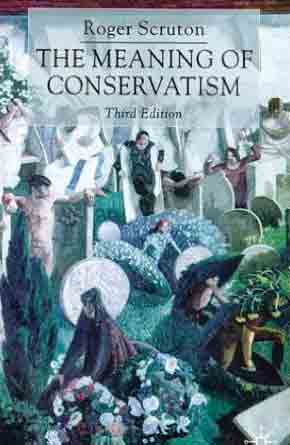 Originally published in Britain in 1980 and revised in 1984, this edition – the first ever in the United States – is a major rewriting of the work.

Scruton's idea of conservatism – what in America we tend to call "paleo-conservatism" – might well shock the sensibilities of those American conservatives" who view it as little more than the workings of the free market. Conservatism, says Scruton, is neither automatic hostility toward the state nor the desire to limit the state's obligations toward the citizen.

Rather, conservatism regards the individual not as the premise but the conclusion of politics, a politics that is fundamentally opposed to the ethic of social justice, to equality of station, income, and achievement, or to the attempt to bring major institutions of society (such as schools and universities) under government control.

The conservative outlook, says Scruton, is neither outmoded nor irrational. On the contrary, it is the most reasonable of political alternatives. The evils of socialism, he maintains, lie precisely where its supporters find its strengths, and the conditions for the credibility of socialism have long since disappeared. Neither socialism nor liberalism can come to terms with the real complexity of human society, and both appear plausible only because they direct attention away from what is actual, toward what is merely ideal.

From earlier editions of The Meaning of Conservatism:

"The book provides exactly that swift kick on the intellectual bottom which every undergraduate student of political science needs, most of them more urgently than ever before." – T. E. Utley, (London) Daily Telegraph

RT @matraszek: At last my own copy of the great ⁦⁦@HorcherF⁩ ‘s tome on ⁦@Roger_Scruton⁩ has arrived. Can’t wait to digest and enjoy in the…
In loving memory of writer and philosopher Roger Scruton. Two new books to seek out:𝘛𝘩𝘦 𝘔𝘦𝘢𝘯𝘪𝘯𝘨 𝘰𝘧 𝘔𝘰𝘶𝘳𝘯𝘪𝘯𝘨 ed. Mi… https://t.co/8FrU8ixI7K
Just in time for Christmas...details of our Summer School Programmes can now be found on the website https://t.co/8ucm2u1Z5j
Follow Scrutari semper on Twitter