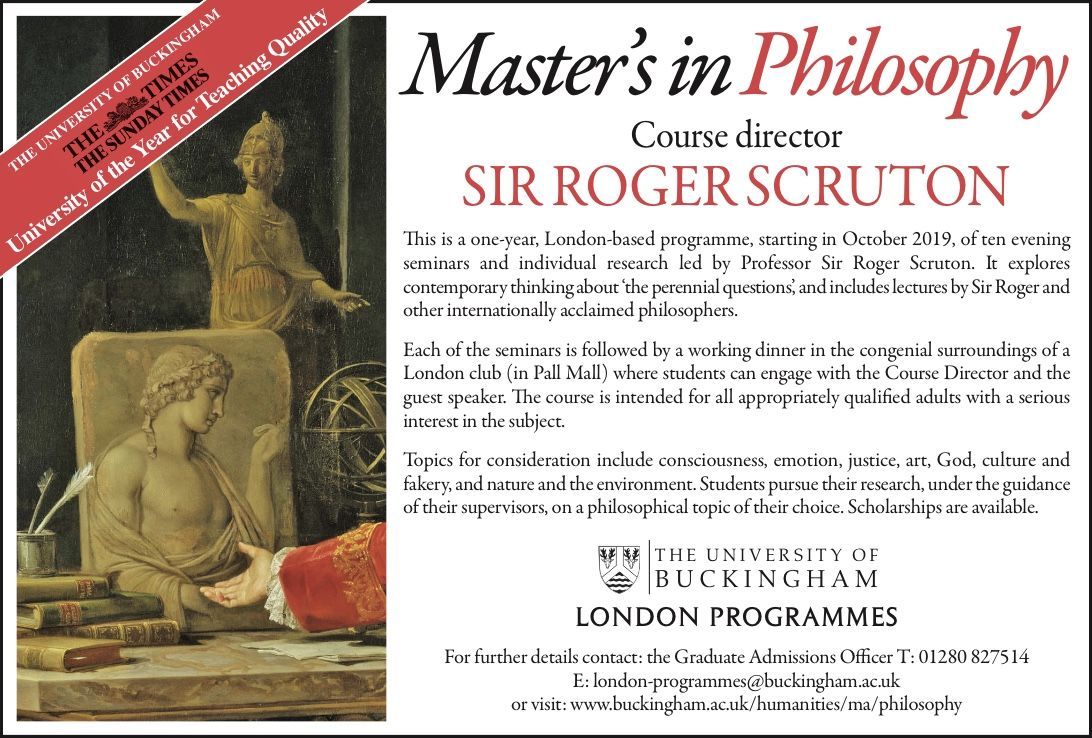 I am now a fellow of the Humanities Research Institute at Buckingham University, which has given me the opportunity to teach a philosophy MA by thesis, the details of which can be found here.

Buckingham is a unique institution, probably the least politically correct university in Europe, and one that is organized more or less entirely on business principles, paying people like me according to their success in attracting students. Its Chancellor, Lady Keswick, and Vice-Chancellor, Sir Anthony Seldon, have both distinguished themselves in other careers, the first in politics, the second as Head Master of Wellington College. Founded by Margaret Thatcher, Buckingham was at first more a business school than a fully developed university. Now it has a growing and successful humanities faculty, and takes advantage of the Charter which some neglectful bureaucrat allowed it to obtain in order to validate degrees at both undergraduate and postgraduate level. It is expanding its presence in London, with the use of a building in Gower Street and the possibility of obtaining a permanent home in the centre, within mortar range of the BBC. My own course takes place in a private dining room at a London Club, where the students can enjoy discussion and wine over dinner, supplemented by private tutorials leading to a written thesis on a topic agreed between us. This return to civilised teaching, of people who are really interested in learning, has been a refreshing experience for me, and the success of the first year has encouraged me to offer the course again for the year to come.

Similar MA courses, taught in London, are available, in the following subjects and the Fellows of the Humanities Research Institute are listed here, including many well-known names. Voted University of the year for Teaching Quality by The Times & The Sunday Times, and enjoying a growing reputation among leftist professor paralytic with fury over its existence Buckingham is setting the agenda for higher education in a society that would otherwise be very soon without one.

1. Thursday 10th October 2019.
Niall Ferguson. Understanding Modernity.
Niall Ferguson is an historian by training, but also one with a developed philosophical approach, and students are strongly advised to look at his book Civilisation: The West and the Rest, published in 2011, to get an idea of his approach to the great geo-political and cultural conundrums that currently confront us.

2. Thursday 31st October 2019.
Alicja Gescinska: Continental Philosophy and the Lebenswelt.
Alicja Gescinska is an award-winning Polish-Flemish novelist and philosopher, who has made a study of Max Scheler, Karol Wojtyła, and other important voices that are too often overlooked by analytical (that is English-speaking) philosophy. A reading of Max Scheler’s book on Sympathy would be a good introduction to her talk.

3. Thursday 28th November 2019.
Simon Backburn: What is Philosophy?
Professor Simon Backburn FBA is a leading analytical philosopher who will show why the study of language and logic is not a dry and uncreative addition to philosophy but part of the essence of the subject. His highly influential and readable book Think should be on every philosopher’s desk.

4. Thursday 19th December 2019.
Raymond Tallis: Mind, Brain and World.
Raymond Tallis is one of the most prolific polymaths of our time. A retired doctor with a profound interest in brain science, he has published essays, novels, poems and philosophical theses at a rate that continues to astonish his many admirers. His latest philosophical work, Logos, 2019, exploring the relation between mind and world, has been enthusiastically received, and would make an engaging introduction to the work of this highly versatile and challenging writer.

5. Thursday 16th January 2020.
Fiona Ellis: God and Nature.
Professor Fiona Ellis is one of our leading philosophers of religion, who has expounded a vision of God and the sacred that builds on the same foundations as the naturalism of our post-Enlightenment ways of thinking. Students should look at the argument of her God, Value and Nature, and connect it to their own thoughts about the relation between the imminent and the transcendent.

6. Thursday 13th February 2020.
Simon May: On Love.
Professor Simon May’s influential account of love, the most recent version of which was published in 2019 as Love, A New Understanding of an Ancient Emotion, OUP, has helped to return anglophone philosophy to the realm of the relevant, and students will learn much from its author as to what philosophy can be and how it can make a difference.

7. Thursday 12th March 2019.
Douglas Murray: The Madness of Crowds.
One of the most distinguished and combative of the younger generation of political commentators, Douglas Murray has turned his highly philosophical mind to the question on which philosophy, as a public enterprise, now depends: the question of free speech, witch-hunting and the hysteria of crowds. How can we ensure that the questions that concern us can remain discussable, in a world where all are afraid of speaking their minds? His book The Madness of Crowds is to be published very soon.

8. Thursday 16th April 2020.
Anthony Daniels: Freedom and Responsibility.
Anthony Daniels, well known for his columns as a prison doctor, under the pseudonym of Theodor Dalrymple, has observed the many ways in which responsibility is being driven from the heart of human relations in our age of instant gratification. His portrait of our cultural crisis is a refined exercise in black humour (see The Knife Went In), but it also opens the question of what freedom and responsibility really are in the age in which we live. On that students might be advised to read Roger Scruton, On Human Nature.

9. Thursday 14th May 2020.
Maurice Glasman: Citizenship, Nationhood and Belonging.
Lord Glasman is a historian and commentator, founder of Blue Labour, who has been an active voice in defining the emerging situation of our country and of Europe, as global ways of thinking exert their influence over traditional ways of being. He will give the philosophical and historical context to the recent crises, and point the way to the application in contemporary politics of the ideas that we have been exploring in this course.

10. Thursday 18th June 2020.
Roger Scruton and team. An overview of the course and encouragement .
We have left this seminar open, because we will want to advise students on how to take things forward in the writing of a thesis. Results from previous years have been very encouraging, and you will be shown examples of theses that have been produced, many of which have been awarded merit or distinction. You will be guided through the summer by your supervisors, and there will be no need to panic. Just remember that the purpose of a 20,000 word MA is to show an understanding of your topic. It is not to make an ‘original contribution’ of the kind looked for in a Ph D.

The MA in Philosophy at Buckingham provides the perfect channel for curious minds to delve into the riches of all that the philosophical tradition has to offer. Those starting out in their exploration of philosophy will enjoy the breadth, while those with some exposure will relish the opportunity to deepen prior investigations. I felt empowered by Professor Scruton to critique The Canon, and the unique atmosphere of the seminars allowed my work to be critiqued in turn. Professor Scruton is a master of words. His lectures speak to the human condition and he tutors his students with care and zeal. I wholeheartedly recommend the programme to all prospective students. I.S

My year on the MA Philosophy by Research programme at the University of Buckingham was one of the most rewarding experiences of my life. It was a great pleasure for me to be able to study under Sir Roger, and to achieve a Distinction was testament to the incredible quality of the content, structure and the teaching offered on the course. G.C

The MA in Philosophy with Sir Roger Scruton was an intellectual and personal endeavor that far exceeded all expectations. Sir Roger is not just one of the world's leading philosophers and writers; he is also a superb teacher in the truest sense of the word. Sir Roger's unparalleled instruction was bolstered only by the program's community of friends, mentors, and scholars. The University of Buckingham's commitment to teaching philosophy under the direction of Sir Roger redounds to the University's credit.  H.S

The Masters of Philosophy by Research has been a profound experience both academically and socially. More symposium than lecture, the regular tutorials have provided a general survey of philosophy – from Aristotle to Descartes, Kant to Hegel — in a unique and engaging setting in the heart of Central London, while the research component has allowed me to investigate my topic, under the generous and expert guidance of Professor Sir Roger Scruton. All the while being supported by helpful and efficient administration and research resources. A.F

Sir Roger Scruton has influenced me ever since my undergraduate days. Now forty years on, I educate business leaders from around the world, all of whom seek success. From Roger I take my meaning of success, which is living the good life as the virtuous life, in its root sense of being fully a person. Studying under Roger has given me fresh inspiration to encourage leaders not to treat the lead as mere resources but instead to recognise the responsibility for their flourishing. Likewise, Sir Roger’s work has me urging the leaders with whom I work not to see themselves as instruments of abstract forces, but as those who need to know and act on what they stand for.  D.H